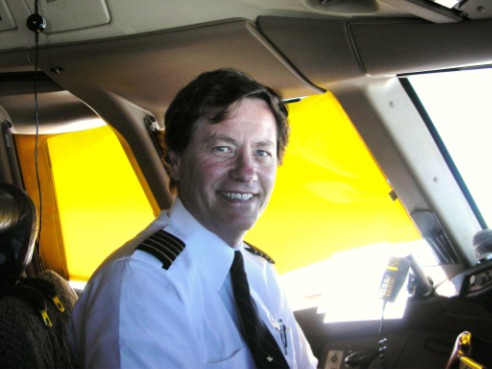 Former naval aviator, United Airlines pilot, and US federal whistleblower Captain Dan Hanley (ret) and his organization, 9/11 Pilot Whistleblowers, have claimed that the 9/11 aircraft were electronically hijacked and remotely controlled.

Married to a Pakistani and a 12-year resident of Islamabad, Mr. Hanley currently serves as director and international public spokesperson for a global grassroots effort called 9/11 Pilot Whistleblowers whose website it at 911Pilots.org and YouTube channel at 911Pilots.

A 35-year veteran pilot who flew 15 different aircraft over this time span accruing over 20,000 flight hours claims that the 9/11 hijackers were too inexperienced and unqualified to have piloted the B-757 and 767 aircraft that day.

“With all my flight experience, I could not have flown the 9/11 flight profiles, especially the Pentagon profile, and neither could the alleged hijackers”, claims Hanley. “There are countless other pilots in our organization and elsewhere who have agreed with my assessment”, he stated.

Case in point is given by 29-year-old Saudi Arabian hijacker Hani Hanjour who allegedly piloted American Airlines flight 77 that struck the Pentagon that day.

American Airlines flight 77 took off from Washington Dulles Airport heading for the west coast. After flying at cruise altitude for a while, the aircraft made a 180 degree turn and headed back towards Washington in a descent. At 7000 feet, the aircraft commenced a 330-degree descending and accelerating corkscrew turn to arrive precisely at ground level without striking the surface at 500 knots to hit the Office of Naval Intelligence on its first attempt. This same profile was replicated in a flight simulator and flown by highly experienced pilots who crashed the simulator attempting this maneuver.

Hanjour, reported to be a very weak pilot by numerous sources, attempted to rent a light single engine prop driven airplane one month prior to 9/11 from the Freeway Airport in Maryland but was denied rental because he was such a poor pilot he could not handle flying the aircraft!

“There were no Muslim hijackers at the controls of the 9/11 aircraft. The aircraft were electronically hijacked and remotely controlled through employment of a system called the uninterruptible autopilot that enables a remote source to take complete control of the aircraft autopilot and flight management system and fly the aircraft to its target destination. Once engaged, the pilots cannot disconnect this system,” he went on to say.

Hanley’s organization claims that there is more than ample proof that this system exists and was developed and produced in the 1990’s prior to September 11, 2001.

“Nonbelievers need only visit the 911Pilots.org website, read it, view the videos there and on our YouTube channel at 911Pilots to be convinced that our assessment is accurate”, says Hanley. Captain Hanley filed a Federal Aviation Administration (FAA) whistleblower report regarding this matter via their hotline in August 2020 but, he claims, the FAA/Department of Transportation and numerous other government offices have been stonewalling his efforts for 18 months. Consequently, he has addressed this issue with the US House of Representatives Government Oversight and Reform Committee, which holds legislative authority over whistleblower cases and government operations.

It remains to be seen whether or not this case will lead to a legitimate congressional investigation.

Captain Hanley may be reached at:
captaindanhanley@outlook.com