Note: Be sure to listen to the podcast at the end that also offers suggestions to stop this...

This article may contain statements that reflect the opinion of the author.

Leaked audio that appears to have originated from a meeting of China’s top war generals reveals elaborate plans for a land invasion in the near future, waged by the People’s Liberation Army (PLA) and augmented with cyber warfare, orbital space weapons and the activation of CCP civilians currently embedded in corporations and governments around the world.

This is the bombshell that has emerged from the leaked audio out of China, for which a full English translation and transcript has now been published by whistleblower Jennifer Zeng at this link. (The English translation is somewhat rough but still very useful.)

Yesterday I interviewed John Moore (TheLibertyMan.com) who offered extensive details on this plan. His source, in turn, is JR Nyquist, with whom I spoke yesterday in a private phone conversation. (I am interviewing Nyquist today during the fourth hour of the Alex Jones Show, where I’m a fill-in host. See that at InfoWars.com)

I’m also scheduled to interview Nyquist in much more detail Monday, with that interview to be posted Tuesday next week at my channel on Brighteon.com, which will also post the recent interview with John Moore: HR Report channel link on Brighteon.com

Some of the highlights of all this, which I cover extensively in today’s Situation Update podcast (see below), including the following conclusions and/or claims. Note that no one can yet prove this is the active plan of China at this moment, but it appears that such plans are being actively pursued:

Readying large numbers of ocean transport vessels for the invasion

From the leaked audio transcript, you can see China’s preparedness activities involving ocean vessels and how they’re being readied for war:

Commanders! Regarding the formation of the fleet and the distribution of personnel and equipment, we are prepared to arrange it in this way.

First, equip the ships with strong cadres. According to the different support items and specific uses, they are formed into 3 brigades, 45 squadrons, and 135 detachments. We have prepared 231 cadres to accompany the ships, 3 of them are in regimental positions, 45 battalion positions, and 183 other military cadres.

Second, optimize the ship’s militia. Equip them with the main crew, veterans, and equipment in a mixed-mode. The transportation ships are mainly manned with defense forces, medical personnel, and correspondents. Ten thousand-ton ships are equipped with a platoon, thousand-ton ships with a squad, and hundred-ton ships with a squad. Each group of the militia is mainly composed of defense forces and main equipment operators.

As to the 2,000+ pieces of high-tech equipment, 480 drones and 70 unmanned boats are currently secured in place. We need to seize the moment to transfer.

Superiors asked us to mobilize 21 network attack and control detachments, we’ve mobilized 15, with a current shortage of 6 detachments and 60 people. We also lack 32 attack and control system industry network expert talents. Our advice is to mobilize Qianxin, Huawei, Tencent, and other key high-tech enterprises, and enhance the corresponding distribution to meet the needs of the troops.

In Shenzhen, we can find all satellite supporting enterprises. Can we take the initiative to take advantage of this area to contribute to the participation in the war to support the front?

In addition, China’s war leader make strong reference to the psychological operations that will be waged by their government to control the population as they wage war against the West:

First, we need to strengthen the protection in political field. Look at the recent several regional wars, especially the Russian-Ukrainian conflict war situation. If you look at the big picture, the United States and the West will try everything to slander us, smear us, in an attempt to confuse right and wrong, to shake our will to win a just and decisive battle. We must give full play to public opinion, legal struggle, psychological war and militia teams to strengthen the guidance of public opinion and psychological protection, and cohesion of patriotic support for the positive energy of the military front.

Estimated timetable is early November of this year

Although the leaked audio does not specifically refer to a calendar date, JR Nyquist told me he believes the planning details point to a rapid timetable, perhaps early November of this year. That would of course help the Democrats avoid any mid-term elections where they would be removed from power due to the overwhelming American frustration with Joe Biden’s catastrophic fake presidency and the total destruction against America that has been unleashed by Democrats who rigged elections in order to steal positions of public office.

An invasion by China would suspend the mid-term elections and place America into a near-instant military dictatorship, commanded by none other than Joe Biden, the Impersonator-In-Chief who can barely command his own lips, much less the entire U.S. military.

Get the full analysis in my Situation Update podcast, running about 90 minutes: 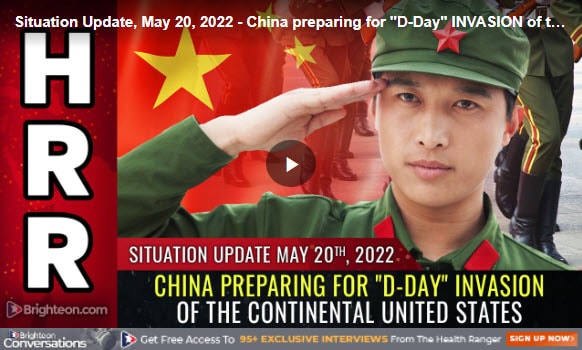