I’m sure that many of you have noticed a constant drumbeat for more & more gun control. If only we had better gun control, so the narrative goes, there would be fewer deaths from gun violence. But is this really true?

In recent years I’ve researched both the ramifications of “gun control” and the history behind the 2nd Amendment. I presented a condensed version of the following at a Toastmasters meeting a few years ago.

My objective today is to help us understand why the 2nd Amendment is so very important for preserving our freedoms without going into too many details.

Why did our Founding Fathers consider the 2nd Amendment critically important?

Why is more “gun control” always pushed after every high profile shooting that makes the news, even though only a few people might have been killed?

Why isn’t there any urgency to deal with gun violence in cities like Chicago? In 2020 there were 769 homicides as gun violence surged in Chicago.

Between 1933-1945, how was it possible that 11 Million People allowed their guns & means of defense to be taken away and then be killed in Auschwitz & similar places? The answer is incredibly simple! You LIE to them & constantly change the lie to meet the objectives! Hitler said: “Make the lie big, make it simple, keep saying it, and eventually they will believe it.” As the lies were spun, the trains were willingly loaded & rarely stopped until inside the 15,000 extermination camps.

During the last century, 56 Million defenseless people (the size of CA + TX) were rounded up in Germany, the Soviet Union, Turkey, China, Guatemala, Uganda, Cambodia, & elsewhere and exterminated. This was in addition to all others killed & injured by wars. Governments around the world are still killing defenseless citizens. 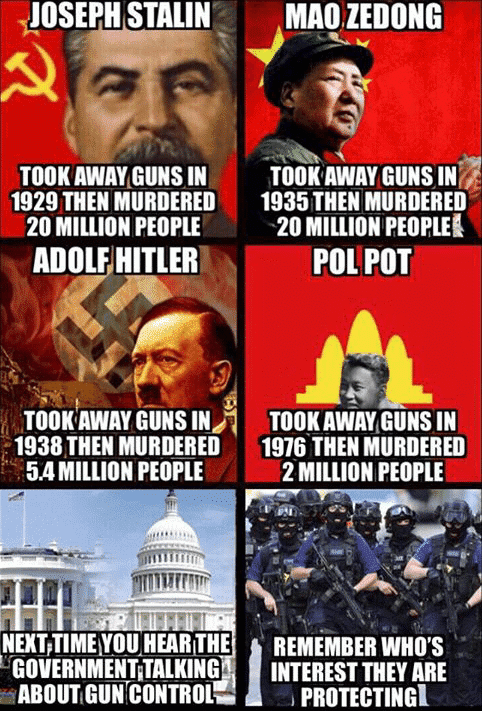 The pattern has always been the same. It becomes a lot easier for governments to slaughter “undesirable” citizens after their guns have been confiscated.

Our government defines killing 4 or more people as a “mass shooting”. Why do they use such a LOW number? Using an Excel spreadsheet, I analyzed all gun deaths during 2015 in our country. This told a much different story than the media & the gun-control crowd would have you believe.

The shooting in San Bernardino CA killed 14, Boseburg OR 10, & 39 other shootings killed between 9 & 4. Mass shootings ALWAYS occur in gun-free zones like schools, theaters, & shopping malls where people are not armed & can’t defend themselves.

Even if you outlawed guns, criminals will always have access since they don’t follow the laws anyway! According to the FBI, the #1 weapon used in violent crimes is a baseball bat!

To add an additional perspective, let’s take a look at the following causes of death reported by the CDC, FBI, & other government sources. 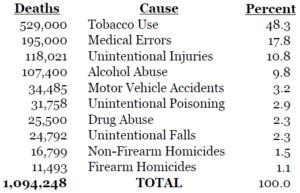 Why, why, why is there always such a push for more “gun control” after every “mass shooting”? Although never stated by the “gun control” crowd, the real reason for this push is to keep chipping away at the 2nd Amendment in order to eventually neuter & abolish it.

This would never eliminate guns. It would mean that ONLY the government would have the guns. If you have paid any attention to history, you will know where that can lead. 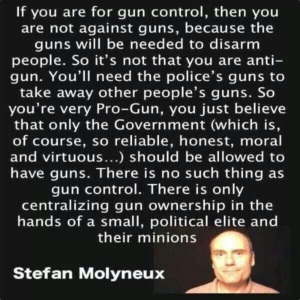 No matter what form of government has ever been designed, there are always people with tyrannical objectives who would like to take over as dictators in one form or another. During 2020 we saw plenty of local, state, & federal politicians & other officials show their true colors as tyrants who wanted to dictate what the rest of us could & couldn’t do.

The colonists understood history & the centuries of armed conflict between the Monarchy and the citizens in England & didn’t want to repeat that. Besides, they realized that they would never have won the American Revolution if they weren’t skilled with their guns before the Revolution.

When the Constitution & Bill of Rights were created, they were very aware that citizens needed a way to hold the government in check, not only with the right structure between the central government, states, & local communities, but all levels of government needed to understand the power of armed citizens if the government got out of hand.

That is why they insisted on the 2nd Amendment, which reads: “A well regulated militia being necessary to the security of a free state, the right of the people to keep and bear arms shall not be infringed.” Notice that is says “shall not”!

George Washington said: “A free people ought not only be armed and disciplined, but they should have sufficient arms and ammunition to maintain a status of independence from any who might attempt to abuse them, which would include their own government.”

During WW2, the following is a reminder how important it was that the Japanese understood how heavily armed our citizens were.

If we include all gun murders in the United States, we are 3rd throughout the world. But if you remove Chicago, Detroit, Washington DC, Saint Louis, & New Orleans, we are 189th out of 193 countries in the entire world. Notice that these 5 cities have strict gun control laws, which obviously don’t work for law abiding citizens. Of course, the criminals will always have access. When you take away the right of law abiding citizens to defend themselves, the criminals have free reign. 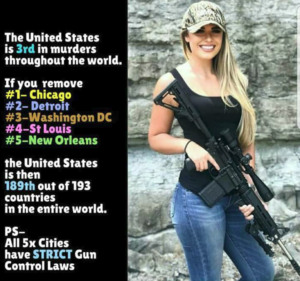 Therefore, the next time you hear talk about gun control, keep in mind WHY the 2nd Amendment is so very important. It has nothing to do with protecting you from the criminals in your community.

It has everything to do with holding a tyrannical government in check. Don’t ever be lulled into thinking that the government is your friend if they take away your right to self-defense!!! Remember the 56 Million defenseless people slaughtered during the last century!!!

Posted in Constitution, Guns
← The Founding Documents of the USANuremberg Code of Medical Ethics →